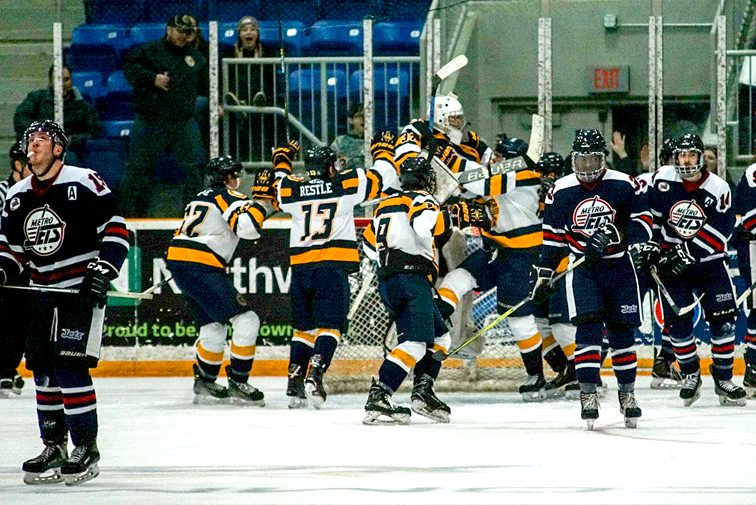 The Southern Tier Xpress pulled off one of the biggest upsets in their short history Friday night.

Hopefully it isn’t too late.

“It was awesome. We are all very excited to have Kepple back,” Gerace said of the 6-foot-4 forward who was reacquired Jan. 26. ” … When he got traded it was the best thing for him at the time. Now that he’s back it’s great. I had this sixth sense that he was in the slot. I found him and he made a great play.”

League-leading Metro (35-5-1-0) entered the game riding a 17-game winning streak, but couldn’t hold a third-period lead against Southern Tier (17-22-0-0). With the win, the Xpress moved within eight points of fourth-place Wooster for the final playoff spot in the division. The Oilers lost to Lansing in a shootout later Friday. Southern Tier has eight games remaining while Wooster has just six. 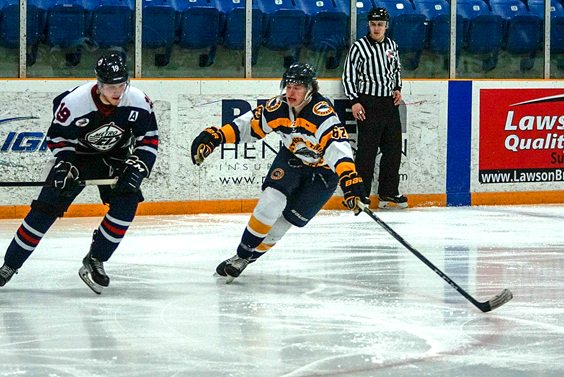 “It’s amazing. I’ve done it once before, my rookie year. At the time they weren’t as good,” Gerace said. “Tonight we snapped a 17-game winning streak. These guys haven’t lost since they went to Minnesota in December.”

Trailing 2-1 entering the final 20 minutes, Lamison tied the game for the Xpress with his seventh goal of the season from Brian Grant.

Southern Tier took a 3-2 lead less than five minutes later when Christian Juliana scored his second of the season from Lamison.

The Jets didn’t go quietly as Robby Flannery scored his 14th of the season from Matt Schaumburger with just over seven minutes remaining to set up Kepple’s late heroics.

“When you are up on a team like that there is an energy going around,” Gerace said. “Getting scored on, it knocks it down a couple of notches. It takes a bunch of warriors to fight and battle to get that next one. That’s exactly what we did.”

Brandon Heacock earned the victory in net for the Xpress, stopping 39 of 42 Metro shots he faced.

“I can’t even imagine what he’s feeling like. He’s a really young kid. He’s born in 2000,” Gerace said. “It’s crazy for him to walk in here and beat the best team in the league.”

Gerace opened the scoring with his 12th goal of the season from Lamison and Stuart Pearson less than four minutes into the game.

“Those two guys are absolutely phenomenal,” Gerace said of Lamison and Pearson. “We’ve had a lot of success this year because we all work very hard. We’re not the most talented guys on the team or on the ice, but when you have three guys who will give everything they have every shift you are going to be successful.”

“We changed just about everything. I have to give all the credit in the world to Lou (Santini). He’s a phenomenal coach. Playing for him, I’ve learned a lot,” said Gerace, who has 12 goals and 26 assists on the season. “He will watch a team and just pick things out that can be used against them. … Tonight our forecheck, backcheck and neutral zone, we changed it all.”

The Xpress return to action Sunday at second-place Pittsburgh.