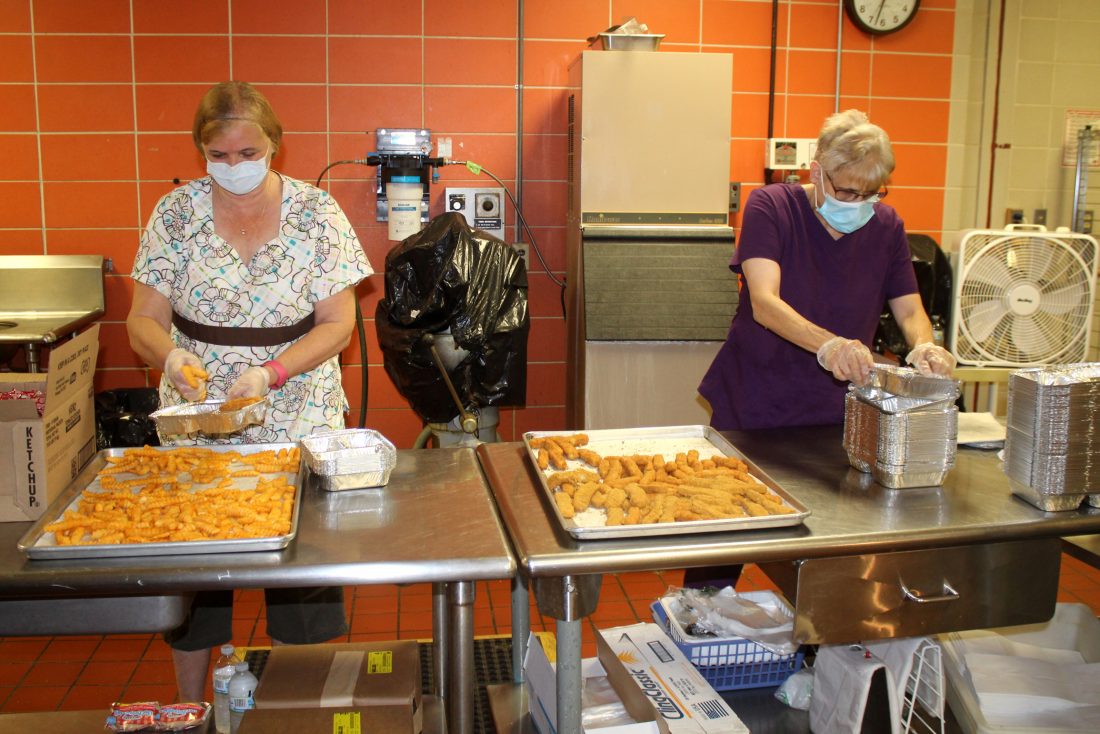 It’s shortly after 9 a.m. at the Jamestown Public School district’s Central Kitchen at Washington Middle School, the hub for the 5,000-student school system’s food and nutrition service, where an array of breakfast foods are being prepped for delivery to students and families who have counted on this resource since March 16.

At the same time, lunch is being prepared and freezers at the facility are growing increasingly bear as workers look to close out food service for this school year.

In a normal year, this hub will help the district produce just short of one million meals during the school year.

In three months amid a global pandemic, it has produced approximately 200,000 grab-and-go meals.

“They’re definitely ready for a break,” food service director Jeffrey Smith says with a laugh, noting the conclusion of the district’s production of grab-and-go meals on Wednesday. Starting Monday, that will be the responsibility of the Jamestown YMCA. 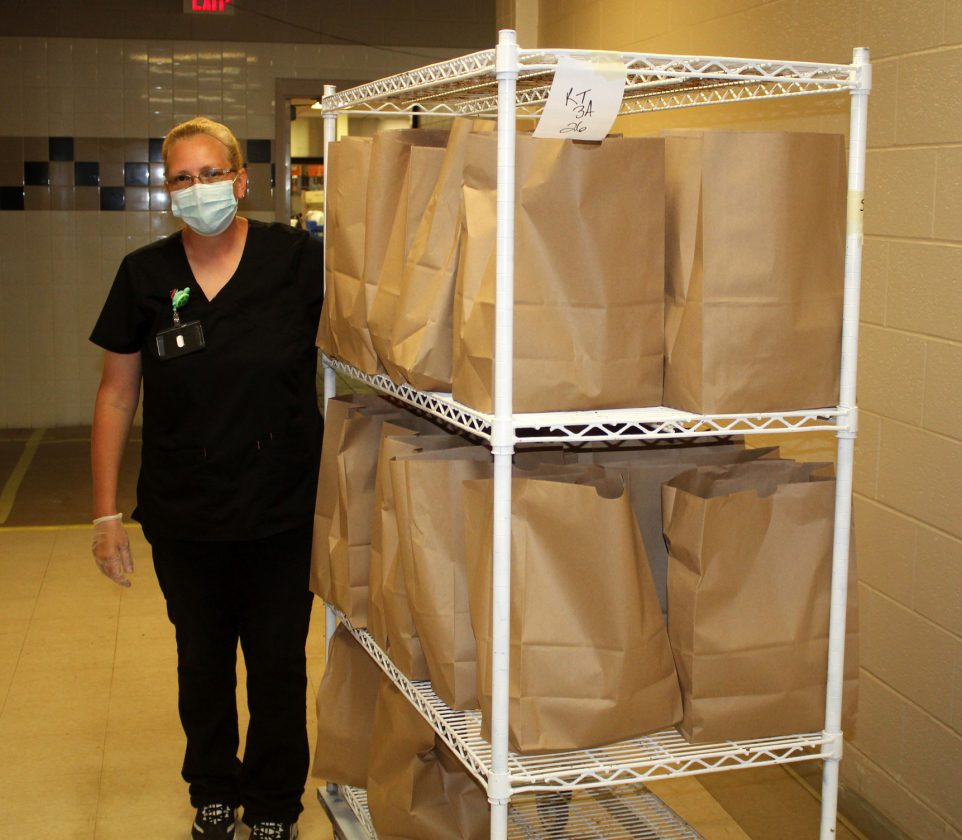 Justine Piazza stands with bags of breakfast meals to be delivered to students from Jamestown Public Schools.

“It’s been a total team effort to pull off this Herculian task.”

But, once schools closed due to the coronavirus outbreak, Smith and his management team worked to figure out the best way to ensure students and families were able to receive nutritious meals during a period of major uncertainty.

“We were in meetings that first weekend and all weekend long administrators and I convened my food service managers and we had our own meeting,” Smith said of that mid-March transition. “We came in and started prepping for things that we needed that we were going to need for Monday and Tuesday. We also had to contact suppliers for new things that we were going to need: to-go containers and paper bags and as you can imagine, they were not in large supply anywhere.”

“But, our suppliers all stepped up and helped us out and got us the items that we needed and they have done great things to help.” 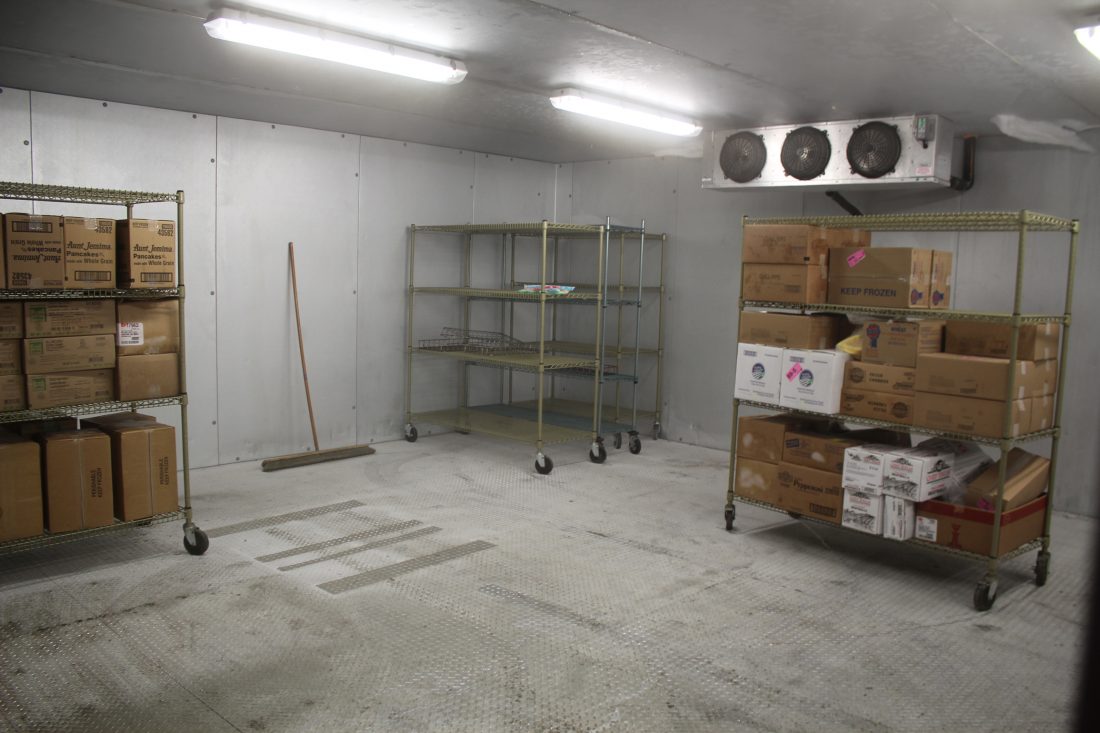 The shift to grab-and-go meals was something Smith was familiar with after spending four years as the executive director of the St. Susan Center, a soup kitchen on Water Street, which ran a summer lunch program in conjunction with the YMCA.

“I had some good training over there,” he said. “When this hit, my first thought was ‘bag lunch’ and the way we set it up at St. Susan’s which is exactly what we did on the first day. We went from serving hot meals everyday to more bagged lunches and salads and we still have some of this food in our freezers that we still need to use. We did a lot of hot lunches during this crisis. The kids still had pizzas and meatball sandwiches and ravioli and all kinds of different things.”

Staff set up a production line and bags, placing the items in the bag and putting them in a cooler for the next day.

“It’s definitely helped us produce more meals in a shorter period of time,” he said.

What Smith hadn’t experienced before was the volume.

“Because people weren’t allowed to come into the schools, we had to have to set up stations at each of the school where people would come up and we had to set up physical barriers,” Smith said. “Our staff would take the food, place it on a table … It’s a little different than going down the cafeteria line.’

Workers, meanwhile continued to put their best foot forward through increasingly difficult health guidelines to keep the virus away from the kitchens at Washington, Jefferson and Persell middle schools as well as Jamestown High School.

“It’s been tough,” said Adele Rasmussen, a staff member at Central Kitchen. “But, it’s just all about making sure the kids have something to eat. It’s for them.”

Smith couldn’t say enough about their work and how they have adjusted.

“They really have done a great job executing our plan,” he said. “We’ve had some days that were real challenges there in the very beginning. After a few days, they got into a groove and they’ve been cranking out meals left and right. That includes both breakfast and lunch. Now they’ll be able to rest up for the summer.”

Smith noted that throughout this crisis, community members have shown their support for his staff.

“People dropped off pizza, sandwiches, donuts, Wegmans donated flowers for the ladies,” he said. “In the beginning, I had people and companies and organizations that made and donated masks. The Untied Way helped us out with masks. There have just been a long list of folks who have helped out with this crisis and I really want to thank the people who have given our ladies a ‘thank you’ for a job well done.”

Now, Smith and his management team of Joe Walker, manager at Central Kitchen, and Leslie Green, manager at JHS, will look toward and begin planning for next year — even as guidelines for a return to school continue to be unclear.

“That’s kind of the million dollar question,” Smith noted. “At this point we’re still waiting for more guidance from the Governor’s office as to what school is going to look at in the fall. We’re planning serving both in the cafeteria but we’re also going to have a plan about serving in the classroom. There’s a lot in the realm of possibilities. Both have very different parameters and challenges for us to work through. We’re working out those details for our plan for once school re-opens.”

In the meantime, however, food service from the YMCA will begin on Monday and continue through Aug. 28. Grab-and-go meals will be served at Ring Elementary, Persell and Jefferson middle schools, the Boys and Girls Club and the James Prendergast Library from 11:30 a.m. to 1 p.m. Children ages 18 and under can receive a meal which includes each day’s lunch and the following day’s breakfast.

Justine Piazza stands with bags of breakfast meals to be delivered to students from Jamestown Public Schools.